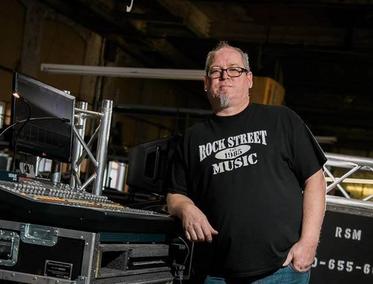 Gene Smith is the head sound engineer for Rock Street Music in Pittston and has been with the company for more than 25 years. He is a graduate of West Side Area Vocational Technical School in Pringle and has also studied sound technology at numerous seminars across the nation.

Gene has been running sound for Flaxy Morgan for nearly 20 years. He has also worked with bands such as 40 lb Head, M-80, Mere Mortals, Dakota, and The Badlees.
His national band credits include John Cafferty, Walk the Moon, and Morning Parade.

Along with local and national acts, Gene has also provided his talents to the Pocono Blues Festival, Fuzz Fest, the ROCK 107 Birthday Bash, and Mohegan Sun Pocono's Oktoberfest and Party on the Patio.